You are here: Home / Culture / On Weather and Fables 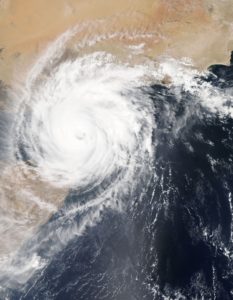 As I post this, Hurricane Florence is bearing down on the Carolinas, predicted to make landfall today and to reach here in the SC Upstate over the weekend. For days we’ve been hearing about how bad this storm is, with dire warnings to run for your life if you’re on the coast—and this one, they say, will have surprisingly destructive force far inland, even here above the fall line.

I believe them. But a lot of people don’t. They’re staying put. And the local first responders are collecting the names of their next of kin so they can notify them after the fools are dead.

Why don’t people listen to such grave warnings?

Well, some people are just foolish. That’s part of human nature. But I think these days there’s more involved.

In recent years journalism has become almost entirely ratings driven. Every story has to be hyped. Local news desks give you a teaser at 8 pm so you’ll tune in at 11—and when you do, the story turns out to be not as big a deal as the teaser implied. In fact, the teaser is more like a National Enquirer headline than actual journalism. And the national desks do it as well. For some time now, Fox News’s Bret Baier has been introducing his evening broadcast—“Special Report”—with an “ALERT” logo—to imply that there’s breaking news, when usually there isn’t.

Everything’s a Big Deal. Go for the adrenaline. Capture the eyeballs. Every day.

And the weather folks are doing it too. Local and national weatherpeople, even the agencies that feed them information—the National Weather Service, the National Hurricane Center, and so on. Every storm is the Storm of the Century, or the Snowpocalypse, or some other frightening neologism.

And they start saying these things 5 or 6 days out, before they can have any sort of reading of the storm with any scientific basis. At that point they can’t predict the path—but it MIGHT hit a population center!—or the intensity or the size of the storm. But they can get several days of good ratings by fearmongering.

Why do they do this? I’m sure they would say that they’re doing a public service by giving the population plenty of time to prepare for any eventuality. And they do, and for that I’m grateful.

But I think it’s demonstrable that there are other reasons as well. For the news outlets, they want the ratings, the eyeballs, because that drives the ad fees, and that means money in their pockets. For the agencies, they want the exposure, because that usually turns into stable future funding. There’s a strong element of self-interest in this.

Which is fine—capitalism and all that—except that there’s a downside.

As Aesop noted all those centuries ago, when the boy cries “Wolf!” repeatedly, eventually people stop believing him—even when he’s telling the truth.

Now, lots of people in Charleston remember Hugo, and lots of people in New Orleans remember Camille and Katrina, and they’re wise enough to get ready and get out. We’ve seen the interstates looking like parking lots the last couple of days, and I had a visitor in my class this morning who’s been evacuated from his school down on the coast.

But other people in hurricane-prone areas have heard repeated frenetic warnings about literally every storm with a snowball’s chance of reaching any point of the North American coastline. And in many cases those storms were described superlatively—this is a rare and even unique threat. And in most of those cases, the warnings haven’t panned out—usually because the hype started before there was any scientific basis for it.

When you’ve seen that happen a few times, you’re tempted to start downplaying the warnings. Significant numbers of people who live on the coast, and who can remember the last 20 years, are going to board up their windows, buy some batteries and bottled water, and settle in to watch the storm through their beach-facing picture windows.

And eventually, some of them are going to die—probably in great quantities, during the same genuinely powerful storm.

And whose fault is that? Might there be blame for more people than just the ones who died?

Photo by NASA on Unsplash