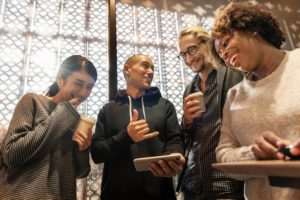 In his column at National Review last week, Jim Geraghty thought out loud about a New York Times book review of Kwame Anthony Appiah’s The Lies that Bind. (Did you follow all that?) Appiah raises concerns about the way introductions work. Pretty much everybody, on meeting somebody else, asks questions about him—where are you from? where do you work? Appiah suggests that this tendency to want to categorize people might often imply a sort of racism or at least stereotyping.

Geraghty thinks that identity politics might be contributing to that. Immigrants. Wall Streeters. NRA members. Police officers. We react instinctively to certain groups, positively or negatively, depending on where we are on the political or cultural spectrum. He observes that this kind of thinking contradicts the very idea of America as a place where anybody can become anything with enough hard work and perhaps a little luck (or providence). Upward mobility. No feudalism. All that.

I think Geraghty is right, and based on his description of Appiah’s book—which I haven’t read—I suspect that the latter is right on that point too. I’ve found myself making assumptions about someone I’m meeting, based on his occupation or his appearance or some other information he offers about himself. We shouldn’t do that. People are individuals, not merely members of a class.

My ethnicity is German—as is obvious from my last name. But I’d think anybody who gave me a Nazi salute was just plain weird. I was born in Washington State, but I’m not a liberal Democrat. (In fact the area of the state where I was born is rock-ribbed conservative Republican, largely for reasons of physical geography—which, while interesting, is completely off our topic.) I spent my teen years in Boston, but I don’t park my car in Harvard Yard, and frankly, I’m tired of hearing about it from people who think they’re being original and clever. I live in the South, but I’m not an advocate of the Lost Cause. I don’t like being stereotyped, and Jesus tells me that in that case I shouldn’t stereotype others.

Sure, sometimes people ask those questions in order to put the stranger into a box—to stereotype him. But not everybody does.

On a good day, when I ask a person what he does, it’s not to prejudge him—it’s to find a point of contact, to further deepen the relationship—which so far is pretty shallow.

And that goes for geography too.

Here’s the sad part. Because of a lot of past sins, Americans are really, really sensitive about race—or as I prefer to say, ethnicity. You can’t talk about it without feeling like you’re stepping on eggshells, and if you talk about it much, people tend to wonder what you’re up to.

But I find ethnicity just as interesting as occupation or birthplace. If I’m meeting a black person, and I detect what sounds like one of many African accents, I really, really want to ask where he’s from. And sometimes I do. If I were to meet Dr. Appiah—Geraghty mentioned that he’s Ghanaian—I’d be all over that.

Now, as it happens, Dr. Appiah is of Ghanaian descent, but he was born in London, so he might surprise me by saying, “I’ve never actually been to Ghana.” And that’s fine. We can talk about London instead.

Sure, the person is more than these things. But he is these things, and what else he is, is molded, or perhaps reflected, by these things and many others. What’s wrong with wanting to know him as well as you can?

All of this is really cool. Unusual mixtures of genes and cultures and accents and perspectives. I want to interrogate such people about all of that.

Maybe someday we’ll be able to do that without people getting all nervous.

I really hope so.

Photo by rawpixel on Unsplash