He has told you, O man, what is good;
And what does the Lord require of you
But to do justice, to love mercy,
And to walk humbly with your God? (Mic 6.8)

Justice is one of those things that’s hard to define. I suspect that’s because there are lots of situations where we have trouble coming up with the right response, but we know instinctively when the right thing hasn’t been done.

The core of our problem in defining justice is that we are broken people living in a broken world. Human culture is indeed systemically defective, and our evaluations of the resulting problems, as well as our proposed solutions, are broken as well because our moral compasses don’t point north, and our logical processes can’t be trusted as authoritative.

How then are we to do justice?

In the mists of the past some old saint once observed that “what God orders, he pays for.” The words aren’t directly biblical, but the thought surely is. In the broadest sense, an omnipotent God will certainly accomplish all his holy will, or his Son wouldn’t have instructed us to pray, “Thy will be done, on earth as it is in heaven” (Mt 6.10; Lk 11.2). As to the specific issue of justice, Peter assures us that God’s “divine power has granted to us everything pertaining to life and godliness” (2P 1.3)—an astonishing truth indeed. On the individual level, certainly, the believer can expect that God will enlighten and enable him to do whatever God has commanded. Including Justice.

Peter’s sentence continues: “through the true knowledge of Him who called us by His own glory and excellence.”

The better we know God, the more clearly we’ll understand justice, and the more accurately we’ll be able to apply it.

How do we get to know God?

We dive into its deep waters, and we spend time there, soaking, swimming, observing, immersed in truth and seeking the pearls that are certainly there. Over time, we begin to think the way God teaches us to think, to love what he loves and to hate what he hates. We begin not only to see with clarity that a given situation “just isn’t right,” but to see how it can best be remedied in ways consistent with God’s.

The longer I live, the more I’m inclined to think that justice is not most effectively imposed from the top down, or the outside in. You can tell people that racial discrimination, for example, is wrong, and you can make laws against it, but people inclined to engage in racial discrimination will find ways to do it out of public view, ways that can’t be effectively prosecuted. And what do you call it when lots of people like that live together?

You call that systemic racism.

Laws can’t fix that. Of course societies should seek to make injustice difficult, and laws are a part of that. But they can’t fix the underlying problem.

This old guy has come to believe that justice—real, lasting justice—has to come from the inside out. It has to come from the heart, from individual people who are determined to want justice and to act within their sphere of influence to do justly and to encourage others to do the same.

In other words, to follow the biblical pattern: regenerated sinners, indwelt by the Spirit of God, illuminated to understand His Word, and imbued with that Word by long hours of study and meditation, begin to think about justice as God thinks, consequently seeing the wrong and seeing the path to making it right.

Doing justly, one person, one home, one block, one neighborhood at a time.

Photo by Luis Quintero on Unsplash

One of the most well-known passages in the Old Testament springs from an argument between God and his people. The prophet Micah writes to the people of Israel—there’s some in there for the Northern Kingdom, but primarily he focuses on Jerusalem—and brings a word of judgment: “the mountains will melt,” he says (Mic 1.4).

For rebellion—and specifically, for idolatry (Mic 1.5) and for abuse of fellow Israelites through fraud (Mic 2.1-2).

For three chapters the warning continues, alternating between a catalog of Israel’s sins and a catalog of the judgments that are coming.

Then, suddenly, the tone shifts. God’s looks beyond the judgment to the days that will follow. God will establish his kingdom in Jerusalem for a time of peace, prosperity, unity, and true worship (Mic 4.1-8). Even in the face of judgment, God’s people can look forward to his mercy (Mic 4.9-13). He will send a deliverer, born in Bethlehem (Mic 5.2), who “will arise and shepherd his flock” (Mic 5.4). The rest of chapter 5 eagerly anticipates the day of blessing.

But with chapter 6 the tone returns to the earlier chastisement. God has an indictment against Israel (Mic 6.2), and justice must be done.

You would think that God’s people would respond to all this with repentance, either out of fear or out of eagerness for the blessing. On the contrary, though, their response is shocking.*

What do you want from me?! Do you want all my animals, my entire flock, in sacrifice? Would that make you happy? How about if I slaughter my firstborn son for you? Will that be enough?!

What do you want, anyway?!

You can practically see the veins popping out on Israel’s neck.

If you and I were God, there would be a smoking crater where Israel was standing.

But we’re not God—and all the universe is infinitely better for that. God’s response to his insolent children is as shocking as their insolence. In calm, measured tones, he surprisingly de-escalates the confrontation with words of invitation and reconciliation.

You know what I want; I’ve told you before. I don’t want anything unreasonable or destructive or confiscatory.

In Jesus’ time, the rabbis argued about which of the 635 commandments in the Scripture was the greatest. One of the favorite candidates was this passage. (As we know, Jesus chose another, Deuteronomy 6.4.) It’s easy to understand why some of the rabbis argued for this one. It’s theologically, logically, and rhetorically deep, and brilliant, and pleasant to the soul.

I think it’s worth spending a little time on. I plan to spend the next 3 posts meditating on the 3 things that God kindly and patiently requested from his estranged people.

* Scholars disagree on the tone of Micah 6.6-7. I think the context justifies the tone I’ve ascribed to it here.

Photo by Luis Quintero on Unsplash 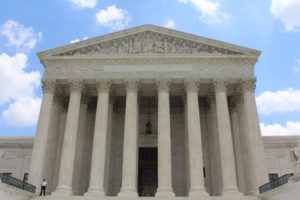 There’s no sense in my jumping into the Kavanaugh battle with a personal opinion; there are bazillions of those already, and I have no experience that gives me any special insight into legal issues.

But I do find something waaay back in the writings of Moses that may give us a little something to think about.

The legal difficulty of sexual assault is that it typically doesn’t happen in the city square, with lots of witnesses. The nature of sex as a private function means that abuses of the sexual function, like its legitimate uses, tend to happen in private. And in private, there are just two witnesses. If the sex is abusive, then the two witnesses are the perpetrator and the victim.

He said, she said.

That’s how it almost always is.

In biblical times it was the same way, of course. I note that in those days, unlike today, rape was a capital offense. I’ve heard it argued that today it shouldn’t get the death penalty because if the rapist knows that, he’ll just go ahead and kill the victim, since that would eliminate a witness without increasing his penalty. I recognize the logic, but I still would prefer to see the death penalty for rape, particularly in a day when DNA testing can make the identity of the perpetrator absolutely certain.

But back to my point. In biblical times, rape got the death penalty. But here’s the thing: elsewhere the biblical law restricted the death penalty to cases where you had at least two or three witnesses (Num 35.30; Dt 17.6).

Contradiction, no? Rape gets the death penalty, but there are never enough witnesses to actually get it carried out. The woman loses, every time.

There’s a special provision for allegations of sexual assault. In the midst of some broad-ranging regulations in Deuteronomy 22 (help an animal stuck in a ditch [4]; don’t kill a bird sitting on a clutch of eggs [6]; build your house so that visitors are safe [8]), there’s a point about sexual assault.

23 “If there is a betrothed virgin, and a man meets her in the city and lies with her, 24 then you shall bring them both out to the gate of that city, and you shall stone them to death with stones, the young woman because she did not cry for help though she was in the city, and the man because he violated his neighbor’s wife. So you shall purge the evil from your midst.

25 “But if in the open country a man meets a young woman who is betrothed, and the man seizes her and lies with her, then only the man who lay with her shall die. 26 But you shall do nothing to the young woman; she has committed no offense punishable by death. For this case is like that of a man attacking and murdering his neighbor, 27 because he met her in the open country, and though the betrothed young woman cried for help there was no one to rescue her.

If the attack happens near other possible witnesses, then we assume that in a nonconsensual encounter the woman would protest in ways that those nearby would hear. If she says later that it was rape, then she is judged to be lying since she didn’t scream during the assault.

Women lie sometimes too. Even about things as serious as rape. We have to take that into account.

But if the event occurs away from possible witnesses, the woman gets the benefit of the doubt. Maybe she did call for help, and there was nobody to hear her.

Now, a woman having a consensual sexual encounter in the woods might lie too. She could decide later that it was a mistake, and she could decide to get the poor guy in beaucoup trouble. That could happen.

But here, she gets the benefit of the doubt. As the only witness. In a charge that bears the death penalty.

When do we do which? That’s a really tough call; as someone who served on a jury for a case of child sexual assault, I know exactly how difficult it is.

Which, I guess, disqualifies pretty much everybody this time around.

Photo by Claire Anderson on Unsplash