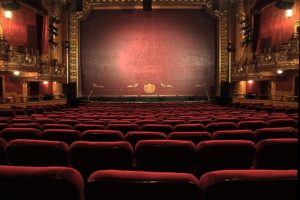 Last week I had the pleasure of performing in a minor role in BJU’s Classic Players production of Shakespeare’s Much Ado about Nothing. I’ve enjoyed being able to act in a few other productions as well for the past couple of decades. (My first real acting experience, beyond the occasional skit, was in my 40s, when a friend offered me the role of Grumio in The Taming of the Shrew. I knew nothing about acting, and he kindly and patiently directed me to the point where I wouldn’t make a complete fool of myself—and him. Thanks, Ron.) This one was directed by my long-time friend and colleague, Dr. Lonnie Polson (“Rehearsal is not where I tell you what to do; it’s where you show me what you have already done”).

I love everything about the experience. The rehearsal hours are long and sometimes tedious, but that’s the price of getting to the point where you don’t fear complete chaos on opening night. And in those rehearsals I get to watch real actors work, experimenting with different ways to say their lines and deciding what kinds of body language and business make the role genuine. Then there’s the work of the crew, including costumers who make an idea real and attentively see that the costume fits the actor in such a way that he can do what he needs to do on stage; makeup artists, who spend significant time creating art that’s going to last for just a couple of hours, but in the meantime transform actors into exactly the people they need to be; and wig & hair artists, who complete what the makeup artists have begun with what amounts to the cherry on top. And during performance, the crew is standing in the wings, ready to fix anything that goes wrong in their area of responsibility.

And we’re just getting started. There’s the audio crew, who see that we’re all fitted with working microphones, which the aforementioned wig folks hide in our hair relatively painlessly; and the lighting crew, who have labored for hours to design and implement scores of lighting cues, checking angles and colors and lumens so that the stage comes alive for each scene; and not least, the stage crew, who do the hardest physical work in a precisely choreographed dance while working diligently to be completely invisible.

I love all of them, and all of it. I love the smell of the stage (though not necessarily “the smell of the crowd”), the smoothness of the scene changes, the arc of the story, the magic of the make-believe world.

It’s worth the effort.

And its benefits are far greater than just the entertainment value or the moral of the story.

A couple of examples.

First, there’s a character benefit to the cast. You can’t cram for a role; for a live show, the lines, and the business, and the blocking all have to be ingrained in your long-term memory, so that you can include in your attention the vagaries of live performance. In one of our performances, the Dogberry character, a professional-level actor, started his line “I give your worship leave to depart” as “I give your leaship ….” In a split second, he had to decide whether to restart the line, which the audience would obviously notice, or press on with an ad lib. And in that split second, he realized that the line would work perfectly if he continued, “word to depart.” So he did. And, in my opinion, he actually improved on Shakespeare’s original—if you know Dogberry.

Now, if the character is going to be that deeply a part of you, you have to discipline yourself to review your lines and visualize your role every day; that degree of memorization comes from regular, spaced repetition. It requires character and commitment. It’s always seemed odd to me that some stage actors, whose work requires that level of solid character, seem to have such undisciplined lives offstage.

Second, there’s a benefit to the entire cast and crew from working as a team. You can’t mount a production of any magnitude by yourself; even if you know everything about acting and electricity and carpentry and costume design and makeup and hair and music and lumens, you simply can’t do all that work yourself, because you’re not omnipresent, and the show lasts only so long. You need your fellow cast members, if there are any, to execute their lines and blocking; for a rapid costume change between scenes, you need costumers, perhaps several of them, to get you out of one and into another; if the wig adhesive lets go during a fight scene, you need the wigmaster in the wings to fix that right now; you need the phone to ring at precisely the right time; you need the set pieces to be at the right place for every scene, and sometimes you need them to move while you’re delivering a particular line; you need the choreographer not to run you into a statue—or the second row of seats.

Everybody needs to be focused on his responsibilities, and he needs to execute them correctly.

And you need to trust all of them with the kind of trust that comes from working hard together over time.

That’s a recipe for success in the real world just as certainly as in the magical one.

Photo by Peter Lewicki on Unsplash