You are here: Home / Culture / Groovier Than Thou 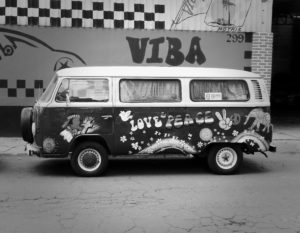 Jesus came and said to them, “All authority in heaven and on earth has been given to me. Go therefore and make disciples of all nations, baptizing them in the name of the Father and of the Son and of the Holy Spirit, teaching them to observe all that I have commanded you. And behold, I am with you always, to the end of the age” (Mat 28.19-20).

This is the Big One, the Prime Directive. If we don’t give attention to this, nothing else matters. The church’s job—the individual believer’s job—is to present the gospel to everyone on earth, evangelizing, baptizing, teaching.

So how do we catch their interest?

There are 2 schools of thought on that.

I grew up in churches that held to the first view. It was the 60s, and many of us Christians tried to be as groovy as everyone around us, as a lever for inciting interest in the Lord we served. “Real peace through Jesus, baby.”

Sidebar: I know the word groovy hasn’t occurred to anybody in 40 years. It’s anachronistic and therefore odd. It sounds like somebody who’s not cool but who’s trying to be—desperately and clumsily, like a 70-year-old woman with long, bleached-blonde hair, a barbed-wire tattoo, and a bikini. I’m using the word intentionally, and I’ll come back to the anachronism problem later.

I was much older before I understood the theological and historical roots of this approach. It was rooted in a couple of ideas, one centuries old—oddly enough—and one quite recent at the time.

The first theological basis was post-millennialism, which has been around since at least the 17th century. This view, still popular today, especially in some Reformed circles, is the idea that Christ will return to earth after the church has established the kingdom through centuries of increasing power and influence. Today it’s the basis of Christian Reconstructionism, or Dominion Theology. The view finds its biblical roots most obviously in Jesus’ teaching that the kingdom will arrive slowly; see, for example, the parables of the mustard seed (Mat 13.31-32) and of the leaven (Mat 13.33).

If post-millennialism is correct, then the church needs literally to take over the world, to become its ruler. And if that’s not going to happen by force—I don’t know any post-millennialist who’s advocating force today, despite the fear-mongering from the American political left, which tries to paint all evangelicals as Dominionists, people who want to take over the whole system and impose their beliefs on everyone else—then it needs to happen by influence in every area of life. The church needs to win at everything, in every area of culture.

The second theological basis was a proposal by a leading American evangelical, Harold Ockenga, in the late 1940s. He called for a “new evangelicalism” that would be characterized by 3 distinctives: 1) a rejection of fundamentalist separatism; 2) a commitment to academic engagement with theological liberalism; and 3) a commitment to social involvement. Those who embraced Ockenga’s proposal called for replacing separatism with “infiltration.”

And that in turn opened the door for evangelicals of my generation to try to be groovier than thou.

But as I participated in and observed that strategy, I wasn’t happy with the pragmatics of it. I noticed that we weren’t having much success at attracting long-term disciples with grooviness. They would be more accepting of us—perhaps, if we were groovy enough, and our grooviness didn’t come across as fake and manipulative—but that didn’t seem to translate into their being more accepting of Christ. And I couldn’t help noticing that being groovy affected us, our thinking and our behavior, a lot more than it affected the people we were trying to reach.

I wasn’t happy with the theology of it either. I knew that salvation is God’s work, not ours—from beginning to end. I knew that justification and glorification are entirely God’s work; and I knew that sanctification, which occurs between those two, while something we play a part in bringing to pass, is empowered, enabled, by the Spirit of God.

And so I knew that the very beginning of that process, conviction, is the Spirit’s work as well. It’s not my clever turn of phrase, or my quickness with exactly the right answer to the doubter’s question, or my overpowering intellectual brilliance, or my grooviness—or even Jesus’ grooviness—that brings the unbeliever to Christ; it’s the power of the Spirit, using the living Word of God (Heb 4.12), that confounds the doubter’s resistance from the inside out (John 6.44).

So. I don’t have to be groovy. In fact, since what’s groovy changes as quickly as the word used to describe it—cool, hip, rad, awesome, whatever—I’m going to waste a lot of energy trying to keep up with an ever-moving culture (what?! you mean Hanson’s not rad anymore?), energy that would be better invested in simply telling and living the gospel story.

So I’ve quit trying to be groovy—and that’s made my daughters’ lives easier, if nothing else.

And you know what?

There’s great freedom in not carrying the burden of getting the unbeliever to Christ. God will do that. I don’t have to be cool enough, or smart enough, or quick enough to carry it off. All I need to do is live the fruit of the Spirit, and tell the story.

Or, as my friend David Hosaflook says, “Pray, meet people, and tell them about Jesus.”

And, come to think of it, that requires all the energy I’ve ever had.

Photo by Katia Rolon on Unsplash