You are here: Home / Theology / Somewhere Out There 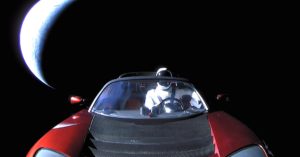 OK, that car thing was really cool. Sure, it was a waste of a really good car, in the most materialistic of senses, and sure, it was symbol over substance, and sure, they’re saying the radiation will destroy it in a year, and sure, it’ll never actually get to Mars, and sure, even if it did, without any propulsion it would just crash into it and join the rest of the rust.

But still, it was really, really cool. Sometimes symbol is every bit as important as substance.

And it got me thinking.

The half-full folks think, “They’d know we’re here! And they’d come looking for us! And share their technology! And wouldn’t that be just awesome!”

And the half-empty folks think, “Are you OUT OF YOUR MIND?! They’d know we’re here! And they’d come looking for us! And make us slaves! Or eat us! Or something!”

Well, I’ll observe that if they come looking for us, then they’re way more advanced than we are, and the outcome is going to be pretty much out of our hands at that point.

But we’re getting ahead of ourselves, aren’t we? Shouldn’t we be asking if there’s a “they” at all?

A lot of people think there is. Are. Whatever.

I suppose we think like that because we want to. We’re social people—God made us that way (Gen 2.18)—and we want there to be Others. And since we’re broken, and everybody we know here is broken (Rom 3.23), maybe we like to hold out hope that there will be less irritating people Out There.

So we posit reasons and evidences. Evolutionists argue that as many galaxies as there are, there must be bazillions of planets, and a lot of them must be in the Goldilocks zone, and surely the odds favor that evolution has happened out there too. (Methinks they misoverestimate the odds that evolution happened even here.)

Even my fellow Christians—using the term fellow relatively loosely—have suggested biblical evidence for life on other planets:

Well, suppose we get a little more, um, down to earth, and give a little theological thought to the subject?

This possibility does raise a bunch of questions. For example,

I’ll tell you what we do know.

God has invested us with a stewardship here, and now, on this planet, and we need to make that our first priority. Speculation on matters like this are useful in that they can exercise our theological thinking and may provide insights into other theological questions. But they cannot replace direct obedience to the Great Commission (Mt 28.19-20) and to our fundamental purpose as images of God here on earth (1Co 10.31; Rom 11.36).

So that’s enough speculation for today. Let’s get back to Kingdom work, my fellow princes and princesses.

But that car is really cool.