You are here: Home / Culture / On Leaders, Flaws, and Achieving Some Sort of Rational Consistency 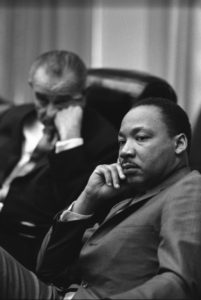 Today is Martin Luther King Day. Or, as the government officially calls it, the “Birthday of Martin Luther King, Jr.” On this day the nation officially focuses on a lesson learned from its past; as the current president put it, to “encourage all Americans to observe this day with acts of civic work and community service in honor of Dr. King’s extraordinary life — and it was extraordinary indeed — and his great legacy.”

We all know that this day, and its good intentions, arose out of controversy—first, the very painful controversy surrounding the Civil Rights movement, and then more controversy regarding the personal character of Dr. King himself.

Political conservatives, in my opinion, pretty badly missed the boat in dismissing the Civil Rights movement as simply “communist agitation,” first, because it sprang from a serious social problem in our culture and was not simply a minor issue stirred up by enemies of the nation to foment instability. Of course the extreme left sought to use the movement for its own very different ends, but that minor fact hardly renders racial segregation and discrimination minor problems. Both political and religious conservatism are founded solidly on the principle of divine creation of all humans and the rights and respect that come with that status. Conservatism speaks often of equal justice under law. We conservatives missed the boat—badly—on this one. We took the wrong side.

And then there’s the second controversy. When Congress discussed making Dr. King’s birthday a federal holiday, there was considerable opposition. Some of it, doubtless, came from those who just don’t like black people. Further opposition came from those on the political right who didn’t like anybody aligned with the political left. But some opposed the holiday on the ground that Dr. King was a flawed character, one whose birthday we shouldn’t honor with a federal holiday.

Charges were leveled against his memory. The most significant was that he had been unfaithful to his wife. Some charged, based on his acceptance of support from left-wing organizations, that he was a communist. Others noted that while he preached non-violence, violent protests seemed to follow him wherever he went. The character argument received new life several years after President Reagan signed the holiday into law in 1983, when Dr. King was found to have plagiarized his doctoral dissertation in systematic theology at Boston University in 1955.

Can we celebrate a holiday as an impetus to social good, based on the noble sentiments expressed in the “I Have a Dream” speech, when the man who gave it was imperfect? Well, obviously we can; that’s what we’re doing. More precisely, then, can we do so in a way that’s morally and intellectually consistent?

I think we can. Here’s why.

First, everyone is flawed. That doesn’t mean that everyone’s birthday should be a national holiday, but it does mean that all of our heroes—all of them—have feet of clay. Washington, Lincoln, the Pilgrims, our veterans, even St. Valentine!—these are people who sinned and who disappointed themselves and others along the way. But they did not surrender to their sinful natures; they rose, as image-bearers of God, to stand for ideas that were bigger than themselves, ideas that are worth celebrating and promoting.

The real question, then, is whether Dr. King did the same, in spite of his status, alongside all of us, as a sinner.

Now, the plagiarism matter was adjudicated by a panel at his alma mater, and they ruled that he was guilty. In my line of work, that’s a career ender, but there are all kinds of mitigating considerations along the way—intent and extent being the most significant—and I’m not in a position to know the details of those matters either.

So what do we have? We have an imperfect man who embraced and promoted high ideals—necessary and good ideals—at significant personal risk, who inspired a great many people to pursue those ideals themselves, whose legacy is directly associated with those ideals, and whose memory is sacred to a lot of people, all of whom are in the image of God, and many of whom are my dear friends and colleagues, of whose character I have no doubt.

Can I celebrate this day and the ideals with which it is associated?

You bet I can.