You are here: Home / Bible / Christmas 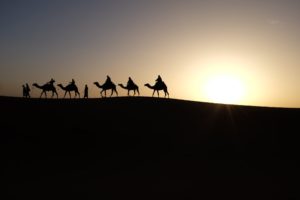 Every Christmas there’s a rash of articles about Christmas myths: Jesus wasn’t born in winter; there weren’t 3 wise men, and they didn’t show up at the stable; the angels didn’t sing.

It’s proper to insist on the accurate retelling of the biblical story, and it’s really important not to say God said things when he didn’t (Rev 22.18), but sometimes I get the idea that the Christmas Mythbusters are just getting their jollies from popping the children’s balloons at the party.

For starters, there may have been 3 wise men; we don’t know how many there were. And Jesus may have been born at any time of year, even in December; we just can’t think of a reason shepherds would have been watching their flocks by night other than lambing season in the spring. And sure, the text says that the angels “said,” but are you really going to insist that angels don’t sing because of that? “Glory to God in the highest” as monotone? Seriously?

Get the biblical story right; but get it right for good reasons.

May I offer a counterexample?

Back to those wise men. They came from the East, according to the oft-mocked song, “bearing gifts … following yonder star … westward leading, still proceeding.”

I beg to differ, and for what I hope is a good reason, an edifying one.

Whatever their names were, they came “from the East” (Mat 2.1), which we take to be Mesopotamia, and thus perhaps were Parthians. They “saw his star when it rose” (Mat 2.2) and consequently traveled to Jerusalem. There is no evidence that they “follow[ed] yonder star” to Jerusalem; in fact, it seems most certain they did not—

So back home in the East they saw some sort of celestial phenomenon, and they went to Jerusalem to see the newly born king.

We’re going to have to speculate a little bit. But there are reasonable speculations, based on evidence. Crime-scene investigators do that sort of thing all the time. Let’s try to do one of those.

The first was Balaam. He was from “Pethor” (Num 22.5), which is commonly believed to be Pitru, near Carchemish in northern Mesopotamia. He was a well-known prophet; records of his extrabiblical prophecies have been discovered at Deir Alla, a town in modern Jordan. The wise men could well have been familiar with his work.

And his work includes the following statement: “I see him, but not now; I behold him, but not near; a star shall come out of Jacob, and a scepter shall rise out of Israel; it shall crush the forehead of Moab and break down all the sons of Sheth” (Num 24.17). He finishes this prophecy with these words: “Alas, who shall live when God does this? But ships shall come from Kittim and shall afflict Asshur and Eber; and he too shall come to utter destruction” (Num 24.23-24).

Hmmm. A star. Out of Jacob. Who will destroy kingdoms, perhaps including “Asshur.” I think the Mesopotamian astrologers might have been interested in that.

The other prophet is Daniel. He would certainly have been well known, as a high government official in Babylon who was so effective that Babylon’s Persian conquerors kept him on in their government too. He prophesied of an “anointed one” who would be “cut off” (Dan 9.26) along about, oh, 30 years from now, in the wise men’s day. They’d be interested in that too.

They see the celestial phenomenon. It disappears. They remember the star prophecy of the king from Jacob. They check the timing of Daniel’s prediction. Yep. They saddle up and head for Jerusalem, report to the palace, and ask where the prince is.

The king’s reaction puzzles them. He doesn’t know what they’re talking about. The prince is apparently not his son. Bethlehem, he tells them. Go there, and find the child.

How are they going to do that? Of course there will be children there; but which one is the Anointed? How will they know?

Shaking their heads, they head for the caravan outside in the courtyard. As they exit the building, a strange but familiar light envelops them. They jump for joy.

And he clarifies it for those who want to know.

Photo by Inbal Malca on Unsplash

I’m taking a break from blogging for the holidays. See you after the New Year.