You are here: Home / Ethics / Unbroken by a Broken World 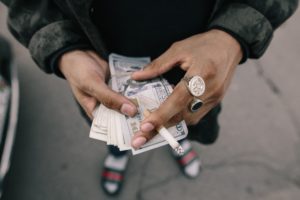 It was a mildly chilly winter day in South Africa, and the BJU Africa team and I were returning from a sight-seeing trip to the Cape of Good Hope—my favorite place in the world. Some of our team members had been surprised by a rogue wave at Dias Beach, and since we were planning to eat dinner at Mariner’s Wharf restaurant in Hout Bay on the way home, they wanted to try to find some (cheap) dry clothes to buy and wear for the rest of the day. So we stopped in Simon’s Town, a beautiful little harbor village on the Cape, where there are plenty of shops.

While they were shopping, I thought I’d use the opportunity to replenish my supply of cash, so I hit a bank machine with my TD Bank debit card to access the team’s account. A quick couple thousand rands, and the transaction’s done. It’s all good.

As I’m leaving the machine, a local man stops me with a kind warning: I haven’t logged out of the ATM, and someone else could come along and access my account.

No, he says, they’ve changed the software; you need to actually log out of the machine, or your account is still open. A random passerby confirms his words. You need to put the card back in and execute a formal logout to protect your data.

I think you can see where this is going.

By the time we’re done, the two guys—they’re working together—have my debit card and the PIN, and they’ve disappeared into the crowd. Three-tenths of a second later, I can see exactly what they’ve done, but it’s too late to catch them.

I make a quick call back to the States to the father of one of the team members, who just happens to be a bank president. He calls TD Bank with my account number, and the account is locked, but not before the scammers have gotten some of our money.

Years later, I can say that it all came out fine. We had plenty of money to pay our expenses, and while I couldn’t access it without the debit card, I did have a credit card that got us through the rest of the trip and home, where we could use the funds still in the account to pay the credit-card bill. No problem.

I’ve learned some things from that valuable experience. (In fact, learning things is what makes the experience valuable.)

Most obviously, things are not always what they seem. We need to pay attention to details; in thinking back over the experience, I realized there were several things that I should have noticed that would have foiled the creeps.

But a greater lesson for me has been the danger of over-reacting—in fear, or in bitterness, or, most dangerously, in cynicism. Not everyone’s a scammer, and while I can engage in practices that lower my vulnerability, I shouldn’t distrust everybody. I should accept legitimate kindness from strangers, and I should offer help to strangers without fearing that they’ll think I’m a bad guy.

There’s always been sin—well, always in practical terms, anyway. The world’s always been a broken place populated with broken people, and nasty stuff happens. But God has called us to shine as lights in that very same world, and the opportunity to shine is only increased by the darkness.

Rather than becoming cynical and distrusting everybody, or becoming fearful and spending our lives in a virtual fetal position, God’s people should march out confidently, ambassadors of the heavenly king, to represent him freely and accurately by taking his love to those who need it most.

Photo by Jeremy Paige on Unsplash